The Collingwood Colts organization have announced their first acquisition since the club was awarded tenancy at the Eddie Bush Memorial Arena in Collingwood. The Colts announced via their twitter account on March 20th 2019 that Dermot Anderson will become the General Manager for the Collingwood Colts hockey team which will operate in the Ontario Junior Hockey League. 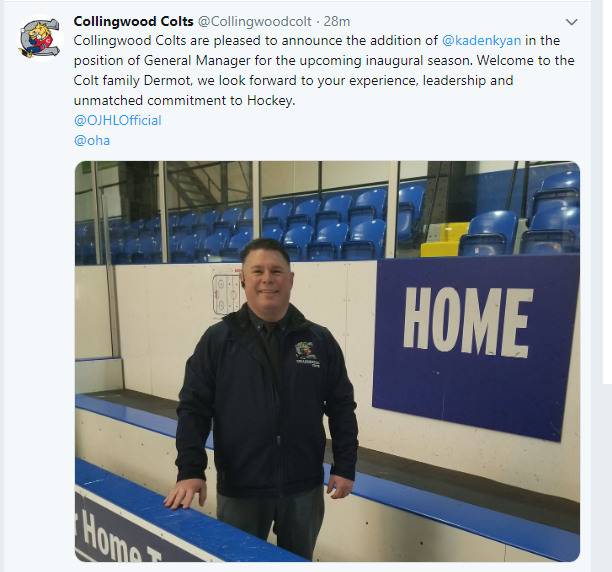 Dermot Anderson, his most recent position was GM of the Aurora Tigers in the Ontario Junior Hockey League, Anderson and the club mutually split after the 2018-2019 regular season concluded. Dermot held the position since 2017 and helped build the Tigers into a playoff contender.

The Collingwood Colts President Dave Steele said in a recent interview “We have had plenty of applications for all positions within the organization; I have a couple candidates that I think would be a great fit for the Colts and I will be in contact with them in the next few days.”

Colts President Dave Steele and the ownership group have found their General Manager and now the management staff can begin shaping their team for the upcoming 2019-2020 season. Dermot has plenty of knowledge on players and teams in the North Division of the OJHL as that is the division where the Aurora Tigers played, also set to become the division where the Collingwood Colts will be placed once the schedule is finalized for next season.

The newly signed GM will help with signing players and building the team going forward as Dermot will bring his previous experience of operating in the same division with him to his new team. The Collinwood Colts are starting to prepare for their prospect evaluation camps and this was a crucial signing heading into camp.